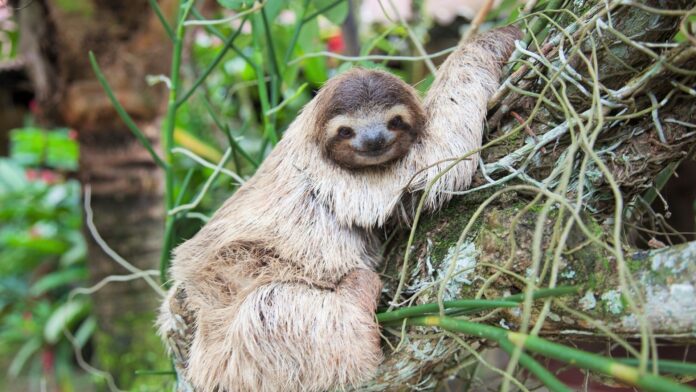 Three-toed sloths are known for being one of the slowest moving mammals on the world!

The majority of these animals can be found in Central and South America. They are only found in South American countries such as Panama, Brazil, Venezuela, Guyana, and Suriname.

Sloths have a variety of adaptations that allow them to survive and prosper despite their slowness.

1. Avocados would not exist without sloths

The extinct gigantic ground sloths were among the few mammals with large enough digestive tracts to consume full avocado seeds.

They ate the fruit and then distributed the seeds over the world. There were around 80 different varieties of huge ground sloths, with the largest (Megatherium) reaching over six metres in height.

All tree sloths that we observe today developed from giant ground sloths. There is also evidence that several different species of marine sloth existed, eating in shallow water on sea grass and seaweed. Source

2. Sloths only use the bathroom once a week and can poop up to a third of their body weight in one sitting

As much as I’d want to believe that scientists have a good explanation for sloths’ peculiar toilet habits, the truth is that we don’t know why they developed the habit of urinating on the ground once a week.

We do know that their digestive tract travels slowly (as expected). A leaf can take up to 30 days for them to digest. Source

Because of their nature, sloths preserve energy by moving more slowly than any other mammal.

Because of their slow pace, sloths seldom traverse more than 125 feet (38 meters) in a single day, and when they do, they only crawl 1 foot (30 cm) every minute. Source

4. On land, sloths are slow, but they move quickly in water

Sloths are remarkably adept swimmers, despite spending much of their time in the trees. They can swim three times faster than they can walk on land!

Three-fingered sloths have two more neck vertebrae than any other mammal, allowing them to tilt their heads 270 degrees and swim with their snout above water. Source

Sloths are the indisputable pull-up world champs; they can lift their full body weight upwards with just one arm from the minute they are born. Furthermore, sloths have 30% less muscle mass than similar-sized mammals but are three times stronger than the average human.

They have a unique muscular arrangement that allows them to develop enough strength to withstand the force of a jaguar attempting to rip them from the tree.

The sloth’s hands and feet have specialized tendons that allow them to hang upside down for long periods of time without wasting any energy.

Sloths may sleep while hanging from a tree limb thanks to their remarkable locking mechanism, and they have even been known to die when hanged upside down! Source

6. Sloths can fall 100 feet without injuring themselves

The physical structure of sloths allows them to fall out of trees. A sloth will fall out of a tree once a week on average for the rest of its life. But don’t worry: sloths are physically intended to fall and live — they can fall from a height of over 100 feet (12 double-decker buses) without damage.

When two sloths fight, it’s usually for the right to mate with a female, and the goal of a sloth battle is to knock your opponent out of the tree. Source

7. They have the potential to cure cancer

Sloths use an interesting camouflage technique: pores in their hair allow a variety of algae and fungi to grow, giving them a green appearance.

Some fungi discovered in sloth fur have been proven to have antibacterial, anticancer, and antiparasitic properties!

Sloth hair also supports an entire ecology of invertebrates, including some species that are found nowhere else on the planet (such as the’sloth moth’). A single sloth’s fur may hold up to 950 moths and beetles at any given time. Source