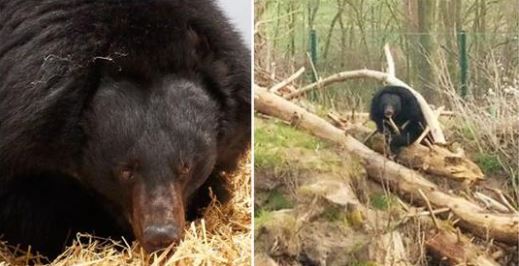 The ongoing Russian invasion of Ukraine has startled the world and harmed millions of innocent people. Many residents have been forced to evacuate their houses, while others have been caught in the crossfire.

While the human toll has been devastating and overwhelming, it has also had a significant impact on Ukraine’s animals, ranging from pets stranded at the border to zoo animals terrified by the sounds of bombs overhead.

But, happily, there are also kindhearted volunteers who have risked everything to evacuate and transfer these animals to safety.

Another animal recently found a safe home across the border: Malvina, a 7-year-old black bear that was transported from war-torn Ukraine to a German protection center.

Malvina had been residing at a private zoo in Eastern Ukraine until the invasion began, when she was taken to White Rock Bear Shelter in Kyiv, according to the Associated Press.

Malvina and many other black bears were then transferred to Germany by the Animal Protection Association of Schleswig-Holstein on March 16.

“Since we still had room for a collar bear in our animal welfare center, it was immediately clear: Malvina is coming to us!”  Tierschutzbund, a nonprotif animal organization in Germany, posted on Facebook.

Transporting an animal across a war-torn country was difficult, as it has been so often during this crisis, but they got Malvina out safely and she is now in good hands.

“The transport became difficult, but in the end we were able to safely bring Malvina to Weidefeld.”

It’s the latest twist in Malvina’s story, according to Tierschutzbund, who “lived for years in a tiny cage in a private zoo” in “catastrophic conditions” before being rescued in 2019.

“Malvina has now found a bear-worthy forever home with us and can recover after her long journey of suffering,” they added.

Malvina has adjusted nicely to her new circumstances. White Rock Bear Shelter was relieved to learn that their old friend had survived the ordeal.

“Thanks to the incredible Tierschutzbund for [giving Malvina a home] and congratulations from her,” they said. “So happy for our baby girl.”