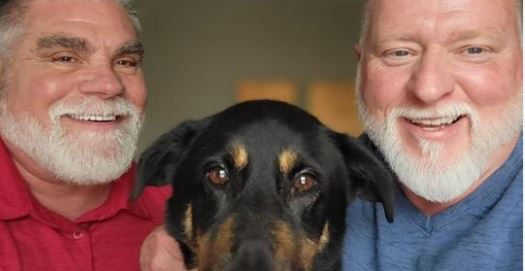 A same-sex couple has adopted a dog that made national news earlier this month after his owners abandoned him because he was “gay.”

Fezco, a 4-year-old dog, was surrendered to Stanly County Animal Protective Services. According to the shelter’s Facebook page, Fezco gets along well with both humans and other canines.

Fezco’s previous owners discovered him sexually dominating another male dog, causing them to believe he was gay.

However, veterinarian Tahl Rozycki told USA TODAY that one of the reasons why dogs may engage in such behavior is that they may have a high level of testosterone that drives the dog to procreate.

Steve Nichols and his husband, John Winn, who reside just outside Charlotte, not far from the shelter, were moved by Fezco’s story, which immediately made national headlines.

When Nichols first heard about Fezco in the press, he says, “I was in shock. I flipped through and passed to the next story, and then something snapped inside of me.”

He said he reread the narrative and watched the video coverage on WCCB before approaching Winn with a suggestion.

“We’ve been together for 33 years, and in 33 years, we’ve faced the same ignorance, bigotry, but we talked about it, and we thought, ‘This time we’re going to do something about it.’”

Nichols contacted the local television station, and the reporter who reported the incident assisted him in reaching out to the shelter.

But it wasn’t long before Nichols realized the puppy required medical help.

He told NBC News, “I spent about an hour with him in the car, and it was obvious to me by being with him that he was in really bad health.”

Fezco was sent to Pressly Animal Hospital in Matthews, North Carolina, after his adoption to be treated for heartworms, neutered, and given a health check.

Dr. William Pressly, a veterinarian, noted that humping another male dog is something that “all dogs do” and has nothing to do with a dog’s sexuality.

“It’s a dominance thing and a play thing,” he added WCCB.

“We’re pretty certain he’s not gay, because he hates having his picture taken,” Nichols remarked in an interview. “What gay person doesn’t want their picture taken?”

Fezco, on the other hand, was renamed after a gay icon by his adoptive parents.

“We named him Oscar Wilde,” Nichols said of the late Irish poet and playwright, “Who is one of the most notoriously gay people in history.

“We like to give our pets animal, human names. We don’t like to call them Fluffy and Sparky or any of that.”

They also have another dog, Harry, a little rescue that they adopted roughly ten years ago. At the couple’s wedding, Harry served as a groomsman.