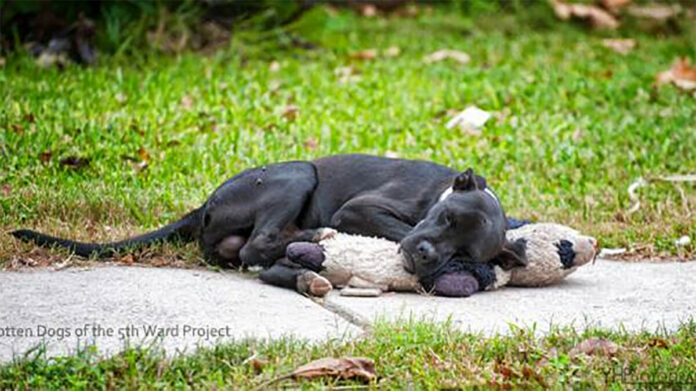 A tragic photo of a homeless dog clutching a discarded teddy bear moved many throughout the country, but it also split animal lovers about the canine’s destiny.

The stray dog was photographed sleeping on the street, his head resting on the abandoned teddy bear.

“How many of the dogs that we see are also thrown out on the street once they have served their purpose?”

Many people were saddened by the photograph and wanted to know what happened to the puppy, so it went viral.

While many people showed pity, others questioned why Yvette did not save the dog instead of simply taking a photo and walking away.

Her response emphasizes the large number of homeless dogs in her area, as well as the national scope of the problem.

Yvette volunteers with Forgotten Canines of the 5th Ward, an organization dedicated to rescuing unwanted dogs in one of Houston’s poorest neighborhoods.

She and her colleagues tour the neighborhood, photographing abandoned dogs in the hopes of locating their owners, spaying or neutering them, providing medical attention if necessary, and, most importantly, finding them foster or permanent homes.

However, the overwhelming quantity of homeless dogs on the streets is too much for Yvette and her coworkers to handle, and she responded to those who condemned her by posting the following on Facebook.

“On one feeding route we can feed up to 50 stray dogs. Of those 50 dogs we are lucky if we are able to save one because the sad truth is, there are not enough foster homes to place these dogs into,” she said on the Forgotten Dogs of the 5th Ward page.

“It is the hardest thing in the world for us to leave dogs like his behind so please don’t judge us.”

“We are a small group of volunteers who are just trying to do the very best we can with what we have.”

The dog, named Teddy, was quickly identified as one of the several dogs that local homeowner Mr Calvin had been feeding.

According to Yvette, the 87-year-old had rescued many dogs from the streets over the years and had as many as 20 in his back yard at one time.

“I hope that by posting the picture awareness has been raised to the plight of the street dog.”

“We are facing an uphill battle and we can only hope that there will come a time when no dog will have to struggle to survive on the street.”

Yvette updated this article last year with the tragic news that animal hero Mr. Calvin passed away in 2018, but thanks to Yvette and her crew, his generosity and love toward these poor pups will never be forgotten.