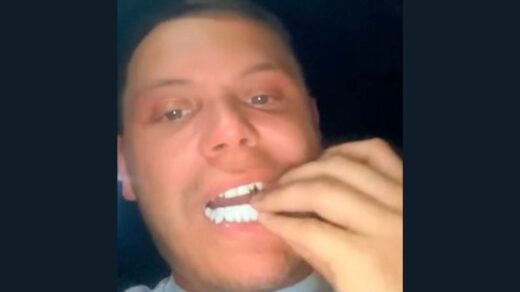 A man was left looking “like a horse” after paying £400 on a set of clip-in veneers that fit so badly he couldn’t speak.

Owen Mcconnel, aka @owenmcconnell59, used TikTok to explain how he wanted a new set of gnashers and spent money on a pair of gleaming white fake teeth.

To brighten up his smile, Owen Mcconnel spent his hard-earned money on a new set of detachable teeth.

Owen Mcconnel was left red-faced after spending £400 on clip-on veneers only to be left with an overbite that had TikTok users in stitches.

This is a terrific value because real veneers can cost up to £1,000 per tooth.

Owen’s end outcome wasn’t quite what he had hoped for, according to the Daily Star, because he had a significant overbite and struggled to talk in a video evaluation he posted online.

Owen was left with an overbite, and his sparkling white fake teeth have been compared to those of a horse, rather than a dashing natural smile.

Owen took to TikTok to share his opinions on the video, which has now surpassed 2.3 million views.

Owen’s fans and friends reacted instantly to the video, with one commenting that he “looked like a horse” and another suggesting that he “enter the Grand National with them.”

“Nah it’s bull**** yeah, these are my normal teeth,” Owen said in the video. ”I waited ages and paid £400 pound for these and I’ve text and complained, they said they are going to sort it.”

In the video, which has been viewed over 2.3 million times, Owen first showed off his own teeth before inserting the bottom row of the dazzling white set.

“Bottom ones are actually sweet, nothing wrong with them.” he added.

Owen’s predicament quickly worsens when his top teeth are trimmed, pushing out his top lip and making it impossible for him to speak.

He was humiliated by the outcome and exclaimed, “Are you going to tell me that these are normal?”

Many people were amused by Owen’s “big” teeth and mocked the veneers in the comments area.

One guy joked, “Whose horse is that?”

Another commenter said, “You could enter the Grand National with them…”

Someone else chuckled, “Mouthful of headstones.”

Meanwhile, a fourth user added the following: “I made the mistake of buying them too. Even my horse has smaller teeth than the overpriced tatt. Never got my refund.”