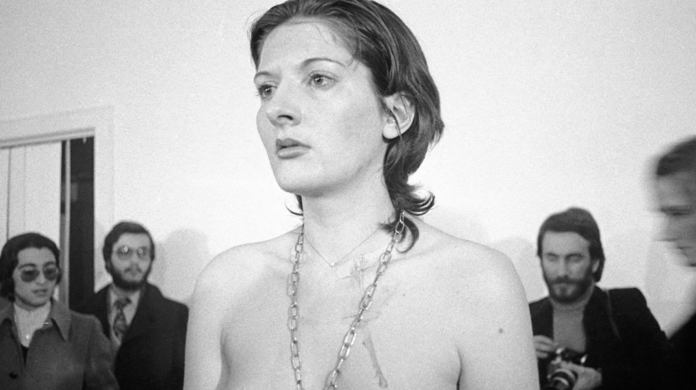 Marina Abramovic, a Yugoslav performance artist recognized as the “grandmother of art performance,” performed a daring piece by standing in front of the audience as a puppet for six hours and allowing people to do anything they wished.

The performance, dubbed “Rhythm 0,” was intended to test the relationship between the performer and the audience.

Abramovic, on the other hand, had a horrifying experience, as she felt abused.

In her own words, she claims that the performance demonstrated how quickly a person may hurt you in favorable circumstances, as well as how easy it is to dehumanize someone who refuses to fight or defend himself.

Abramovic had placed 72 objects on a table and allowed guests to use them on her body as they pleased throughout the six-hour performance.

Some of the things may be used to provide pleasure, while others could be used to cause pain. Rose, feather, honey, a whip, olive oil, scissors, a scalpel, a blade, a rifle, and a single bullet were among the items.

Those tools were authorized by Ambramovic to be used on her body. She wanted to see how violent a person may get when they are not subjected to social consequences.

Her body was stripped and assaulted from practically every angle at the end of the performance, much to her dismay.

Abramovic was stripped down to her underwear and touched. Her blouse had been ripped apart. Acts of violence were committed. Her clothes were ripped from her body.

Cuts were made on her clothes and body with blades.

Abramovic was subjected to a variety of mistreatment. It began peacefully, but as time passed, it became increasingly violent. It all started with a rose and a kiss.

Some individuals forced her to sit so they could do anything they wanted with her. Her position was likewise shifted by others. Some others attempted to affix a few items to her. Some folks had a close relationship with her.

Abramovic’s work also symbolized the objectification of the female body, as she was almost motionless and resembled a puppet in her appearance.

It gave the public the freedom to do anything they pleased and to test the boundaries of what is acceptable in society.

Abramovic began to move towards the audience once the act ended. The audience suddenly exited the room. They were unable to face her as a person.

Abramovic observed at the conclusion of the performance that the audience did not want any confrontations. They were unconcerned with what they had done for the last six hours.

They didn’t want to be held accountable or judged for their acts on her body. She claimed that the audience wanted to forget about how much they enjoyed injuring her throughout the show. [Sources: 1, 2]